Quality education for children from multi-children families
Help the project 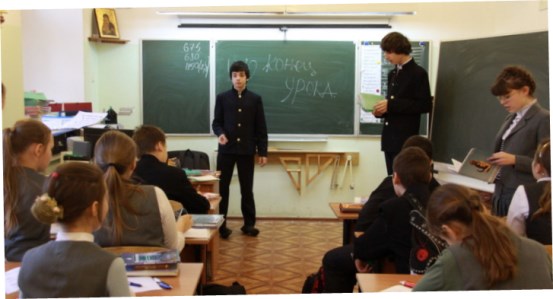 St Dimitry’s Comprehensive School has a classical school curriculum and also specializes in the English language. The majority of its students are from multi-children families.

No more than 20 students are there in one class. There’s only one shift. In the afternoon the students are occupied with music classes, which are as good as a full music school education thanks to its number of hours and quality of teaching. After classes, the students go to extra-curricular activities, such as football, martial arts, volleyball, chess, country studies, modelling and flora studies. Every student can find something to their liking.

“School television” has been operating from February, 2009. “School news bulletins” are regularly uploaded onto the official school website, www.pravschool.ru. Its films have been laureates of various festivals a number of times.

There’s also a modern computer class in the school. The teachers’ workplaces are also equipped with computers that are united into one local network. Sports events are regularly held in a small gym and also at the school’s sports field; from time to time children participate in competitions held by other schools. School camps are run regularly in summers and winters near Voskresenskoye, in the Yaroslavl Region on the banks of the river Volga. A summer singers’ camp has been run in Sevastopol since 2011. In summer 2013 school children went canoeing in Karelia. There have also been two hikes, in the Crimea and Northern Ossetia.

The school has been supervised by a priest, Alexander Lavrukhin, since its foundation. The Russian Orthodox Bishop of Orekhovo-Zuyevo, Father Superior
of the holy pious tsarevitch Dimitry’s church Panteleimon is the confessor of the school.
Donate

If you speak Russian, you’re most welcome to join us in social networks and sign up for ‘Miloserdie’ newsletters

Join us in social networks